Employees, Are You Willing to Change Your Ways? 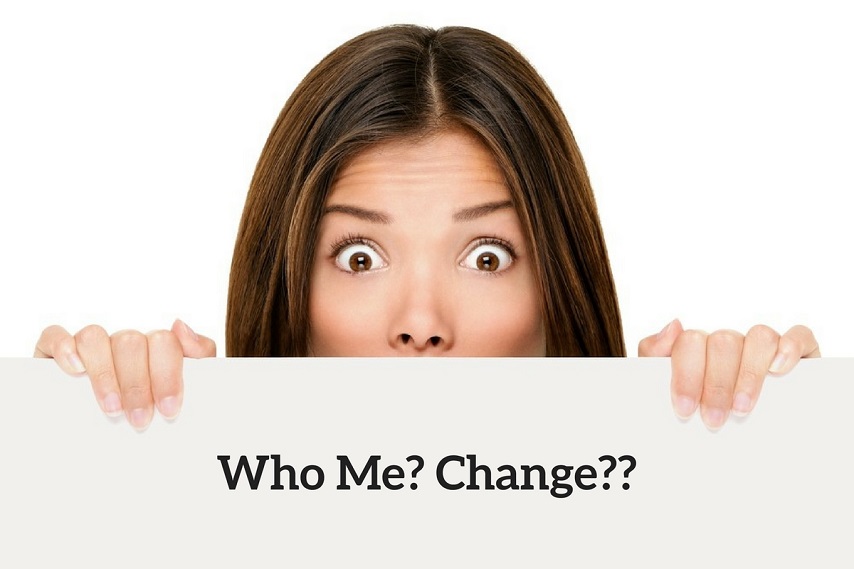 “Our dilemma is that we hate change and love it at the same time; what we really want is for things to remain the same but get better.” —Sydney J. Harris

Isn’t that a great quote? We humans are change resistant, whether we will own up to it or not.

Just listen to others around you. They’re saying, “Why did they have to change that overtime policy? It was fine before.” or “Why are we reorganizing again? Everyone was good with the present org structure.”

Sometimes these thoughts are as mundane as, “Look, they rearranged our office layout AND moved the vending machine to the second floor!” A double whammy!

Having worked in the merger and acquisitions world for much of my corporate career, I know she is not alone in that sentiment.

When we would go into another company, either to create a joint venture, or do an acquisition or divestiture, emotions ran high and sometimes the lines were drawn for battle. “Change OUR culture?” both sides would say. NO WAY! How about changing YOURS?

Robin Sharma said, “Change is hard at first, messy in the middle, and gorgeous at the end.”

I hope it’s gorgeous for you at the end, whether the change is a new boss, new policy, new location or new job altogether.

In the meantime, here are some important ways to help out with the “messy in the middle” part that will guide you to a successful end.

DEMONSTRATE THE NEED FOR CHANGE AND CAST THE VISION

Consider this: People maybe don’t mind change as much as they mind being changed. Makes sense, doesn’t it?

Would you like being told you your Department (A) is merging with Department (B), starting immediately, and you have absolutely no forewarning, much less any chance for input on the change?

When this kind of “forced upon me” change happens, management can expect pushback and downtime as employees canoodle on the unfairness of the change.

John Kotter, in his book “Leading Change,” suggests that 75 percent of an organization’s leadership must buy into the change for it to be successful.

So, if you are managing a team, you will need to make a convincing and pressing case for what the change is and why it is imperative that it happens now.

Also Read: Benefits of Business Mentoring. What’s in it for YOU?

Before you announce to your 100-person department that the merge is getting ready to happen and why, it’s best to enlist, recruit, sign up…whatever you call it, your “Change Champions.”

These are the individuals that believe in the change and will spread good will and good news amongst the team about the forthcoming change.

You’ll hear them saying things like this to fellow team members, “It’s going to be great. Look at the synergies we will achieve. No more overlapping duties.”

Or they’ll encourage the naysayers. “Hey, look at the bright side. It’s no longer a mystery what the guys in Department B do. We will have full insight into what they are producing and how and why.”

They are your ambassadors, first adopters, and front line of the change.

Handpick them because you know you can trust them to do right for the good of the organization.

Also Read: Does Your Employee Engagement Need a Lifeline?

COMMUNICATE AS MUCH AS YOU CAN

I led one acquisition while in the corporate world, and it involved asking employees to move to another location (cross country) in order to stay with the company. However, news was not coming down very quickly from “on high” as to when the move would happen and what their roles would be in the new organization.

I distinctly remember visiting many employees’ offices, listening to them and their concerns about the shortage of corporate communication, and providing what communication I could. Some would say, “Tell me something, anything, we just need to know what’s going on.”

I would do my best to convey how we, the acquiring company, valued them and that the details of the benefits package changes, for example, were being worked.

Moreover, I let them know that, if it worked for them and their family, we hoped they would consider moving to the new location.

I learned an important lesson in that transaction. In the absence of communication about a large-scale change, people will expeditiously look for safe harbor and perhaps leave the company because of too much uncertainty about their future.

Communicate as much as you can.

KICK THE ROADBLOCKS OUT OF THE WAY SO CHANGE CAN HAPPEN

It’s important to move quickly to remove obstacles to the change. It could be a system roadblock, a leader overly resistant to the change, or even amending employees’ compensation to move the change forward.

Whatever the obstacle, the leadership and early adopters need to proactively address and tackle the obstacles.

George Bernard Shaw said, “Progress is impossible without change, and those who cannot change their minds cannot change anything.”

For you, the manager, leader, or mentor, it’s up to you to help people “change their minds about change.”

These steps will help you do it!

Lori Bachman created The MentorShift Group to equip mentors and mentees with a practical and powerful mentoring system. The system is designed to equip those who use it to, not only flourish in their own mentoring relationships, but to be able to transfer its success to others as well. You can contact Lori at lori@loribachman.com

How Mentoring Millennials is Like Driving a Fast, Hot Car

Benefits of Business Mentoring. What’s in it for YOU?

Three Cool Qualities of Millennials Who “Show Each Other the Way”